The most famous temperature reconstruction graph is that done by Mann, 1999. But there are many other, independent reconstructions: 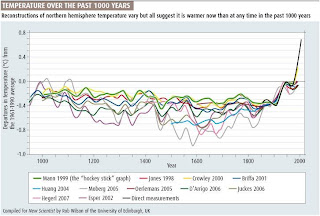 A quick note about the Medieval Warm Period. Temperatures around 1000AD were at similar levels to today in northern Europe across to Greenland. Recent data indicates that the MWP was a local phenomena and mostly confined to that region, rather than a global temperature increase. Current temperature reconstructions from other parts of the globe show no such warming.