A 65 million year old temperature record as told by oxygen-18 isotope measurements (left scale) from fossil ocean microorganisms. During the PETM, the Earth's average temperature was much warmer than today with approximately 550-600ppm CO2 in the atmosphere. The warmer temps were the result of an estimated 1,000 - 2,000 gigatons of carbon released into the atmosphere, resulting in a 5 degree Celsius temperature increase planet-wide in as little as 10,000 years. Even though ecosystems at the time had thousands of years to adjust to the change, there were still extinctions and a turnover of mammals on the planet, in addition to radical changes in ocean currents, among other things.

Climate scientists estimate that humans have put 810 gigatons of carbon into the atmosphere to yield a 100ppm increase in carbon dioxide to its current level of 380ppm. The thing about geologic time is understanding the rate and scale of change relative to today. The current rate at which carbon is entering the atmosphere is faster than when it was released into the atmosphere during the PETM. Ecosystems can adapt to changes that occur over a 1,000 year to 20,000 timeframe. And some of the changes you see on the graph below happened over million year time scales. Can Earth's current ecosystems adapt to potential changes on a much shorter time scale, say as little as 100 years? That's one of the questions. 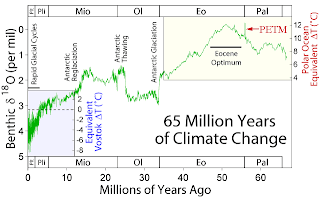